Almuñécar, a municipality in the province of Granada, is a place that stands out for its beauty, its points of interest and for being a coastal town that every year increases the number of tourists who decide to discover its most hidden secrets.

Almuñécar began in the year 1500 B.C. Over time, the town has been coveted by a large number of settlers. Due to its great value, and its enviable climate, Almuñécar has been the victim of great confrontations during the Phoenician, Roman, Arab and Christian periods.

At the end of the 9th century, the first colonisers of Almuñécar were Phoenicians and called it Ex. This name would not last long. The Romans would later colonise it and call it Firmum lulium Sexi. Monuments have been preserved, such as the imposing Aqueduct, the Columbarium of La Torre del Monje and La Albina, the Salazones Factory and the Cave of Seven Palaces.

The Arab village gave us the name of the city, Al-Munekab (fortress on the hill) and remains such as the watchtowers and the Castle of San Miguel. From the Christians we have the Church of La Encarnación and the Pilar de la Calle Real. 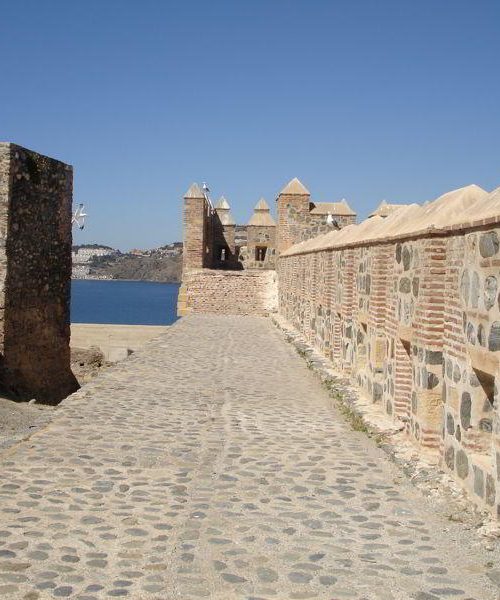 You can’t miss the legendary beaches of Almuñécar, including those with calm waters (such as Calaiza or Cabria), or the naturist beaches (such as El Muerto or Cantarriján).

Beaches such as La Herradura, Almuñécar or Velilla, have numerous services. Some of them have been awarded the European Blue Flag. They also give you the opportunity to enjoy a multitude of water sports.

What to do and see in Almuñécar

More than 19 kilometres of coast bathe Almuñécar, known as the tropical coast. We can find coves of fine sand between cliffs, natural beaches, urban beaches… Ideal for the practice of numerous water activities such as diving in La Herradura or paddle surfing.

If you are a lover of active tourism, you will be able to go hiking, cycling or horse riding, while observing the vegetation made up of a great variety of tropical products such as mango, papaya, cherimoya and avocado. If you prefer to see Almuñécar and La Herradura from a bird’s eye view, we can offer you paragliding, hang gliding…

In Almuñécar we can find many tourist attractions that will not leave anyone indifferent:

Within the typical gastronomy, tropical fruits (mangos, papaya, avocado...) and fresh fish from the coast of Granada cannot be missed. Top quality products, with great variety and very rich in nutrients.

In Almuñécar, as well as enjoying the sun, culture and beaches, you will have the opportunity to enjoy different parks such as: the “Peña Escrita” Nature Park, the Mediterranean Fauna Aquarium, the El Majuelo Botanical Park (in the heart of the old town), the “Loro Sexi” Ornithological Park (located next to the San Miguel Castle).

You can also find a water park in the middle of Velilla beach, the “Aquatropic“. This water park has the characteristic of being formed with salt water.

Almuñécar is a coastal town located in the province of Granada, at the western end. This town is located in a privileged position on the shores of the Mediterranean Sea, near towns such as Jete, Otívar, Molvízar, Salobreña, Ítrabo or La Heradura. Furthermore, due to its proximity to the province of Malaga, we can take advantage of our stay there to make a trip to the capital.

Map of Almuñécar and surroundings

The weather in Almuñécar is quite mild, with an average annual temperature of 18.3ºC. The hottest month is August, with a temperature range of 23-31ºC. The lowest temperatures are detected between December-January, being between 9-16ºC.

Distance between Granada and Almuñécar

Almuñécar is a coastal town that belongs to the province of Granada. The distance from Granada to Almuñécar is 80 kilometres along the road.

How to get to Almuñécar

Almuñécar has very good road connections with both Malaga and Granada. It also has a bus station with many connections.

Furthermore, the distances between many towns and Almuñécar are very short, for example:

Distance from Almuñécar to Málaga

The distance between Almuñécar and Malaga city would be 77 kilometres, approximately 1 hour.

Distance from Córdoba to Almuñécar

The distance between Almuñécar and Córdoba is 230 kilometres, just under 2 hours and a half.

The distance from Almuñécar to Cabo de Gata is approximately 165 kilometres, 1 hour and 45 minutes.

Photos of Almuñécar, Granada. A way of getting to know some of the most emblematic places in the town.

Among the many legends that haunt Almuñécar, two stand out: The one about the mermaid and the well.

From Apal Chinasol aparthotel, we have a series of flats and studios on the beachfront in the well-known Chinasol building.

If you are thinking of a different place to spend your holidays, it is time to prepare a trip that will fill you with enthusiasm from the beginning to the end. Make a bet on Almuñécar and you’ll see how much fun you’ll have.